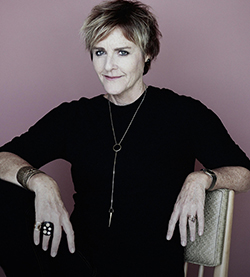 Susan Benjamin has been decorating and designing film, television, and interiors for 25 years. After she and a friend won an Honorable Mention for their elaborate, hand built, and meticulously decorated dollhouse in the Village art show at 9 years old, Susan has been dreaming about receiving awards for her unique designs.

She is known for her eclectic mix of high style with whimsical edges and for her intense attention to detail. In addition to working on Oscar-nominated films, Susan has been nominated for an EMMY award and has received a service award from The Set Decorators’ of America. She is a participating member of the Academy of Motion Picture Arts and Sciences. In 2008, Susan earned her LEED AP certificate allowing her to bring sustainable practices to decorating film and interior design projects.

“I bring my passion for literature and art to all my projects. When decorating for film, I create the character in a story. When decorating interiors for a client, I express their personality and lifestyle.”Susan Benjamin