I am currently “in between projects” as we say in the industry. This is mostly enjoyable when my bank account is flush after completing a long job. It can also be terribly unnerving after having been off for a couple of months but continuing to spend money like I’m shopping with the producer’s debit card.  One thing that never changes is that once a project ends, I will have to search for a new one.

A couple of weeks ago the Producer’s of “Saving Mr. Banks” invited the Production Design team of the movie to visit the newly restored offices of Walt Disney on the Disney studio lot in Burbank, CA. Inspired by the sets that we created for the film, The Disney archives department reassembled the architecture and furnishings in Suite 3H: Walt Disney’s Offices, to the way they were when he passed away in 1966. Because a few of us were “between projects” we were fortunate to get a private tour. 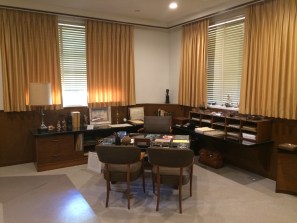 During production of “Saving Mr. Banks”, Suite 3H was occupied by a producer, one of many to revamp this prestigious suite of offices with paint and contemporary furniture.   The production design team therefore had to create the sets using photographic research and our imaginations. During the course of this research we felt we had come to know Walt the man and appreciate the
scope of his vision and genius.  It was incredibly moving to see “our set” come to life when we entered the real office which we had speculated about for months. For Walt Disney, life and art were interchangeable.   I was proud that our set closely resembled the real location and even prouder to be part of the team that inspired the studio to appreciate and preserve their historic treasure.

One of the most memorable pieces in the suite was the iconic Airline Chair designed by Kem Webber for the Airline Chair Company of Los Angeles in 1935.  Kem Webber was an industrial and furniture designer who went on to design the Walt Disney Studio. You may have read about this chair (see the press section of this website) or even seen it for sale on line costing upwards of twelve thousand dollars. But what is most interesting about the Airline Chair is that it could be ordered and delivered to your door in a box filled with individual components that required the consumer to unpack and assemble themselves. Yes, this chair, designed and manufactured in 1934, was the precursor to IKEA!

Because the Airline chair had a cantilevered frame (reminiscent of wooden aircraft components) Walt Disney ordered 300 of them so his employees could comfortably screen the films they were working on. We wanted to use this iconic chair in the making of “Saving Mr. Banks” but the few that remain were either too expensive for us to purchase or too fragile and squeaky for us to use on camera without disturbing the sound mixer. So we purchased the remake, redesigned by Cory Grosser in 2007, from 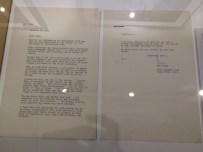 a fabulous store here in Los Angeles called Eccola. This beautifully curated shop stocks extraordinary centuries-old pieces in tandem with modern furniture as well as custom pieces of their own design. (As luck would have it, they are having their first Summer Sale this coming Friday and Saturday, June 17 and 18, from 11am to 6pm.) http://www.eccolaimports.com/

Nearing the end of Walt Disney’s office tour, I noticed a Lucite box with memorabilia from the Disney archives. Included was a letter from Kem Webber addressed to Walt Disney.   Mr. Webber, a successful Industrial Designer who had started his own furniture company and had worked on animation projects at Paramount Studios was asking Walt Disney for employment.   I smiled in sympathy and relief when I realized EVEN KEM WEBBER HAD TO APPLY FOR A JOB.