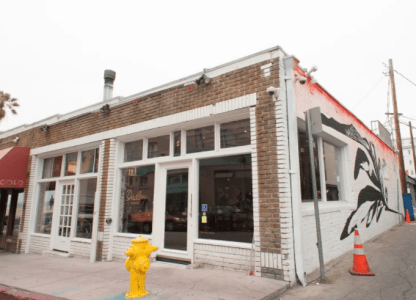 Exterior of the Dudley Market

I have been living in Los Angeles for almost as long as I lived in New York. For the past 26 years I have toiled away as a set decorator in the film and television business. I came out here to pursue my dream and have not dallied in any other career since. After so many years of shooting on sound stages and locations throughout the southland, it’s not unusual that I eat in a restaurant or home or some other venue that I recall having decorated for a shoot. This happened last Sunday when my husband and I went to enjoy brunch at the Dudley Market.

To be sure, Conner Mitchell and Jesse Barber’s new café has all the fixings of a great Venice hang out. The food is delicious, the décor is simple, bright, and beachy, and they pour a wicked Mimosa with your choice of fresh squeezed juices. It is the perfect restaurant for the new upscale, low key, California Venetian seeking Farm to Table edibles on the go. Munching on my spec wrapped fig toast we lamented the closing of Bobo Ivan’s Piccolo restaurant next door and I marveled at the history and changes this one little block in a beachside town had undergone.

From 1958 to 1966 Seven Dudley Avenue was a favorite hang out of the Beat Poets called The Venice West Café. The first time I visited the space in 1990 it was The Sponto Gallery because it was run by the king of the local art scene, Mark “Sponto” Kornfeld.  Sponto kept up the bohemian artist tradition and held court at 7 Dudley from 1984 to 2008 until he met a somewhat sordid demise. Piccolo took advantage of the empty space to expand their restaurant from 5 to 7 Dudley and somewhere in between Henry’s Market on the corner turned in to Dudley Market. 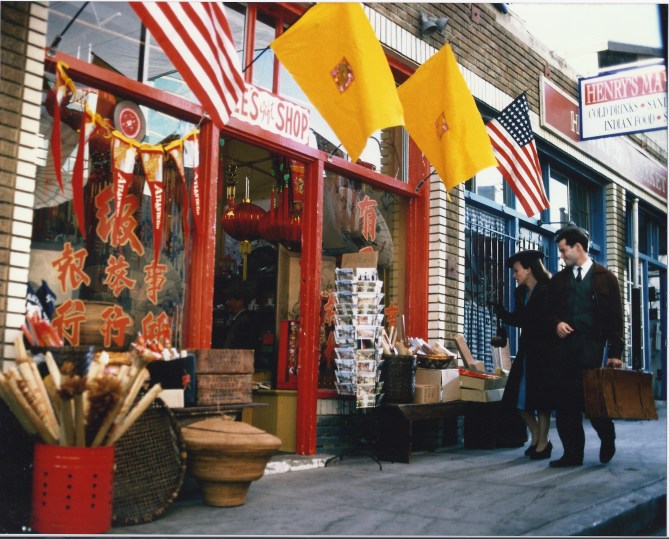 Set for Chinese Store in Coney Island, circa 1930’s

Over the years, many of us “locals” have had the opportunity to transform Sponto’s four white walls into a myriad of sets. About the time OJ was speeding down the 405 in his white Bronco, I was changing Sponto’s gallery in to a 1930’s Chinese Gift Shop on the boardwalk in Coney Island for a little known movie called, “Infinity”.  It was Matthew Broderick’s directorial debut and we all were anxious to show him how we could transform this little slice of Venice in to a believable New York set. 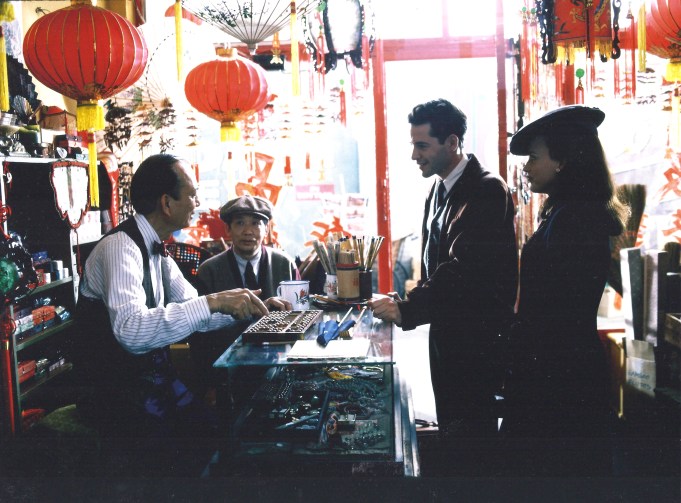 Most of us associate places we have lived or visited with childhood memories, new experiences, and life changing events. But those of us lucky enough to be in the film and television business get to add an extra dimension to those locations. We remember them as a fictional story we have told and wonder what they might become in our next fantastical tale.