There are 3 exhibits of works by Chinese artist/activist Ai Weiwei in Los Angeles right now. For those of you who have not had the opportunity to see his works in person I highly recommend you get to all three spaces for a crash course in awe-inspiring dissident art by a tireless Human Rights Activist.

As a Set Decorator, I was inspired by his use of Wallpaper as a platform for political comment.   “The Animal That Looks Like a Llama But is Really an Alpaca” is the name of this deceptively decorative wallpaper. 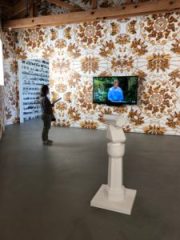 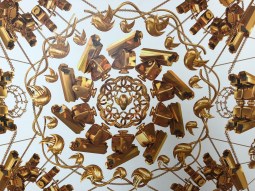 From a distance it looks like French eighteenth-century ormolu but upon closer inspection the viewer sees an ominous array of surveillance cameras. “During his years of domestic house arrest (2011-2015), the Chinese government surrounded Ai’s studio in Beijing with over 20 cameras, recording his activities twenty-four hours a day,” the press release explains. The use of a decorative art form as a “weaponized” medium is interesting to me as a decorator and a filmmaker. 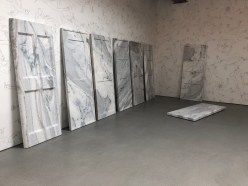 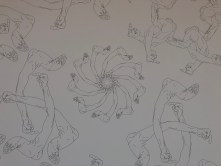 The other papers included in the show at UTA Artist Space were both Black and White:  One containing shadows of what looks like trekking migrants and the other a grouping of middle fingers shaped like a mandala. Juxtaposed with the decorative objects on display, which also contained contemporary subjects expressed in classical forms, the shows challenged me to see all of my work as a voice for reform and vision of change. 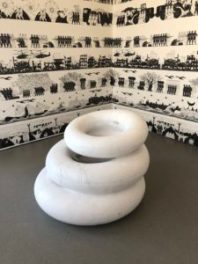 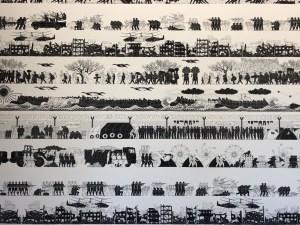