I was one of 25 designers asked to participate in the fundraiser for the Ronald McDonald House at the West Edge Design Fair.  Schwinn donated 25 bicycles and each designer was given one to decorate. They were auctioned off at the opening night party at the Barker Hanger.   The only difference between me and the other designers was that I was a last minute entry and had 2 weeks to execute my plan as opposed to the 6 weeks allotted to the other participants. Because I am a Set Decorator I’m used to last minute changes so 2 weeks actually seemed like a long time. 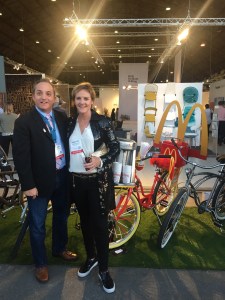 Me and Tommy Monje, Director of Development at the LA Ronald McDonald House

Fortunately, I worked on a movie called “The Founder” about the creator of the McDonalds we know today so it was obvious what my theme was going to be. I contacted the producers and secured some props we made for the movie. Then I started working on the crazy idea I had of creating a portable McDonald’s milkshake bicycle and the running around began. As always, I relied on my trusty vendors to help me manufacture my vision. Aaron at Astek Wallcovering welcomed me in the afternoon before the bicycle was due to be delivered and his talented, enthusiastic staff helped me create the big M that I attached to the back of the bicycle.  My good friend Terence helped me assemble all the crazy parts and pieces in his garage and even hauled the whole thing to the event when I realized it would not fit in my station wagon. That was the one part of the design I had not figured out and is the reason why we rely so heavily on our Leadpeople! 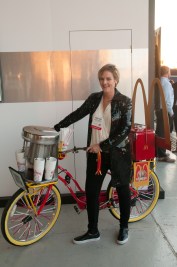 I don’t think my bicycle raised the most money but it certainly created a little excitement and curiosity. It was purchased my Jim Budman, a Venice artist and collector and will hopefully be displayed sometime in his new studio window.

Here is some information on the Ronald McDonald House:

Since opening in 1980, the Los Angeles Ronald McDonald House has provided comfort, care and support to children and families in Southern California. Our hope is to create a community where children and their families embrace life and healing with a sense of hope, enthusiasm, courage and joy. If you would like to donate, you can do so on their website at rmhcsc.org/losangeles .  They have a number of ways to give including their new “Heart of the House – Monthly Giving Club” where you can donate monthly, because small monthly donations can make a big impact. 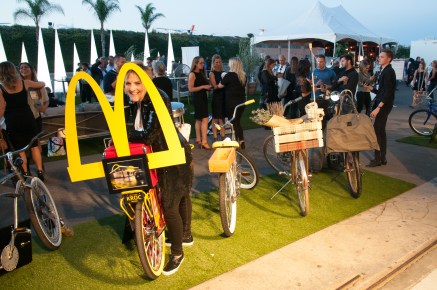 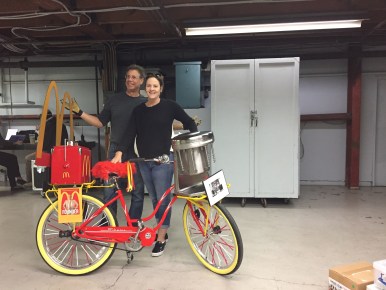 Terence and I delivering the bicycle